ELECTORAL PROCESSES IN THE MODERN WORLD 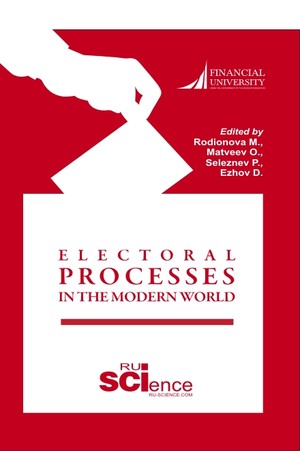 This publication was compiled under the aegis of European Union ERASMUS program 'The New Europe in The New International Order' and is timed to coincide with the Russian Presidential elections of 2018. This book is a continuation of a series of publications under the aegis of the 'Europe facing the challenges of the early 21st century' (2017), and 'Europe in a new world reality' (2016).
The textbook presents the viewpoints of leading Russian and foreign political commentators on the electoral processes in Russia and Europe, including analysis of new electoral practices. The book presents the features and electoral technologies in Russia and a series of European nations (including Germany, France, Spain, Czech Republic, Finland, Great Britain, and others).
The book is of interest to a broad readership, including candidates for political office, electoral campaign managers, party leaders, students of Political Science, International Relations, and Foreign Policy Studies.